The Globalis Company is a direct partner of the only producer of O4 Stabilized Oxygen world-wide.

As general agent, Globalis supplies stabilized oxygen of the highest available value to wholesale and retail traders as well as therapists all over Europe.

Qualified special dealers can be registered as resellers by Globalis. We will supply you with a certificate allowing retail sale of the original
O4 Stabilized Oxygen.

This certificate will guarantee that users are getting only the purest original and safe highly concentrated liquid. 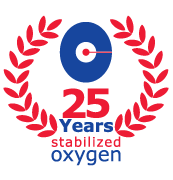 2018 Change of application: aso for water revitalization.
Water rich with Oxygen for the safe production of vital and healthy seedlings and sprouts
2012 Compilation and evaluation of research results on oxygen water in Germany
2010 Extension of patent-office registration concerning aerobic stabilized oxygen and the trademark logo
2009 Delivery to nearly all European countries, as well as Asia and Africa
2008 First export of Original Aerobic Stabilized Oxygen to other european countries
2006 Start of world-wide certification of ASO distributors by Globalis
2005 Development of the quality seal to guarantee original quality to consumers
2004 Changeover to aerobic stabilized oxygen as a pure concentrate
1999 General distribution agent for aerobic oxygen, export to other European and Asian countries, support of water purification in India
1995 Stabilized oxygen for water purification is offered for the first time in Germany
1993 Various oxygen products are compared and tested
1992 First literature concerning oxygen is evaluated
1989 The name Globalis is created as a synonym for unique health products

To certify that you are getting the original concentrate O4 Stabilized Oxygen, a special seal with an identification logo has been introduced in Europe. This is being used on bottles and on flyers. It is sealed / welded in with the label while still in the production laboratory. In this way you can have certainty and use the product safely for years.

Due to direct cooperation and authorization by its only producer, the legal and guaranteed original product is always identified, in Europe, by the seal shown on the left.

- Chlorine dioxide free / chlorite free
- Bioavailable (i.e. it can be absorbed by blood and body cells)
- 100% natural, no additives, no preservatives, no binding agents
- Doppingfree
- Safe also for children, pregnant women and nursing mothers
- Safe for external use (skin...)